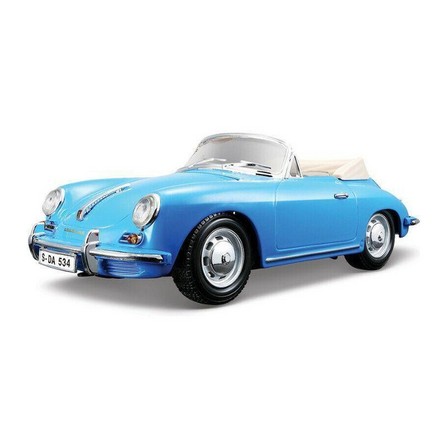 Are you a passionate collector of metal car models? Or do you just want to make your child, friends or acquaintances happy? Metal models of Bburago cars are made directly for this purpose!

Metal model car 1:18 Bburago 18-12025 Porsche 356B Cabriolet from 1961 not only for collectors. It has an opening door and a hood, steering wheel, steering is fully functional. The color of the model is blue.

Bburago collectible car models are among the most popular on the market, not only due to the nice workmanship, but also the friendly price. The body of the models is made of metal and contains a lot of details.

Template information:
The Porsche 356 was the first car to bear the Porsche name. Production began in 1949 and the last car rolled off the production line in 1965. 82,363 pieces were produced. Its successor became the much better known model Porsche 911 .

Bburago Classic model range
The Bburago Classic series offers a detailed pad printing design, detailed internal details of the model (eg instrument panel). The models are packed in the traditional Bburago packaging without a plastic base for collectors.