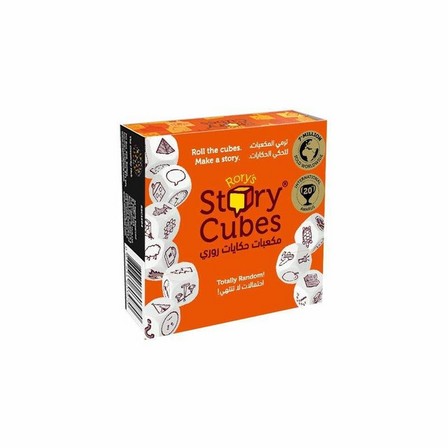 Here's a game that's enormous fun and will sharpen your wits and hone your imagination. The 54 images were designed by Rory O'Connor of Ireland, a trainer in creativity and creative problem-solving. They can be used to arrive at answers or decisions in an indirect and ingenious way. Originally Rory had put the images on the faces of a Rubik's Cube, and players would turn the Cube to scramble the images, then choose one side to play with. Kate Jones of Kadon Enterprises suggested putting the 54 images on 9 separate cubes, to allow for quicker ways to generate more varied combinations, including conceptual puzzles. Rory readily agreed, having considered the 9-cubes idea himself earlier. At a creativity conference held at Kadon headquarters in May 2004, a prototype was whipped up, and in 2005 Kadon launched the cubes version of Rory's Story Cubes.